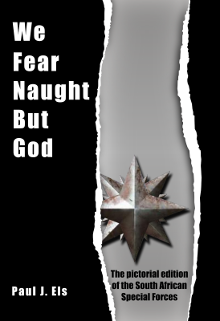 The first ever Special Forces for the SADF started with a small group of eleven men under the command of Commandant Jan Breytenbach all handpicked by him in 1970. They commenced their training in Oudtshoorn and all 11 men did specialised courses in something they were not qualified for in as yet. e.g. divers, demolition, parachute jumping. etc. The group was divided into two and also did courses in France in that year. Their first deployment took place into Angola. With the influx of more members, the group was changed to a Special Forces Unit in 1972 known as 1 Reconnaissance Commando.

It was decided that the unit was to be moved and in December 1974 the unit relocated to the Bluff in Durban. The unit grew in numbers as more and more men qualified as Special Forces Operators. The decision was made to form three subunits: Airborne (Commandant Swart), Seaborne (Commandant Kinghorn) and Pseudo operators (Commandant Verster).

The author served in Special Forces as a signaller for 5 Reconnaissance Regiment and then Special Forces Headquarter for a number of years. He did his parachute course with other support personnel at the age of 35. His responsibilities included the training of operators in communications – radio and Morse code, the control of operational communications networks, plus all cryptography work.

This book on South African Special Forces depicts the Pictorial History from the beginning up to 1994. It is the 4th edition, and the 1st pictorial version of the history of the South African Special Forces, Operators and Operations. There are more than 2000 pictures of 420 full color A4 pages bound in a hardcover showing pictures of events never before captured in one print.