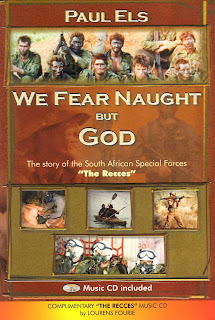 This book is another that I had heard about for a long time, but the original version was out of print and not readily available second hand. Following its republication in 2009, with updates, I finally obtained a copy as I was eager to know more about the ‘Recces’, whose members and operations were covered in half-truths and rumours as much as fact, at least in my own experience during my service in the SADF.

W.O.1 Paul Els served with the ‘Recces’ during his military career, and is therefore in a privileged position, being able to describe much of their history with some accuracy. As a result of this service, he has put together a 401 page history covering the formation and some operations of all the ‘Recce’ units formed, from inception to their eventual disbandment under the new SANDF. Included within these pages are no fewer than 300 photographs, all black-and-white, most of which would be new to readers I am sure.

Let me start my review by saying that this is another admirable effort, and a worthy addition to the history of these elite regiments. The narrative covers all aspects of ‘Recce’ regiment formation, operations and training, descriptions of the latter I personally found particularly of interest. Also, there is the occasional personal account, mainly of men who were awarded gallantry decorations for outstanding service, and the circumstances under which the awards were obtained. Unit heraldry is also covered, including badges, emblems and traditions. The book concludes with a series of appendices, including a Roll of Honour, listing all Special Forces casualties by rank, name, date of death and regiment. There is also a comprehensive list of SF members who were awarded gallantry decorations, entities in support of SA Special Forces and a description of weapons used by them, the latter including photographs.

If there are any negatives to be added, they are relatively minor. However, I personally found that by reproducing so many photographs within the book, the author has perforce had to sacrifice their quality for quantity, and many I felt were too tiny to look at or see properly. Perhaps it would have been better to produce a second photographic volume, to complement the narrative in volume one. That way the photographs would be more clearly visible to even the most visually-challenged reader. These photographs are good, and very relevant to the subject being covered, so why not give them their own volume, or make the book larger? Also, as with any history that attempts to cover such a wide range of subjects in a single volume (all Reconnaissance Regiments) there are some inevitable gaps in the histories, and at times I found the narrative to be a little disjointed, jumping from one topic to a completely different one without any introduction or lead-in comment, which can be a little disconcerting until one gets used to it.

All constructive criticism aside though, author Paul Els has done a great job of trying to bring the ‘Recces’ and their undoubted prowess to the attention of readers at large. I thoroughly enjoyed reading this book, and look forward to more updates from the author in future. Again, highly recommended, especially if read in conjunction with the few ‘Recce’ personal accounts that are available, i.e. Jack Greeff, Andre Diedricks, McCallion etc.

This version is out of print.