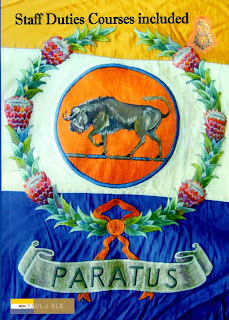 "With this new work Paul Els again exhibits his enthusiasm to unearth facts from our military history and to preserve them for the benefit of the next generation. The plethora of historical facts and illustrations in this work will undoubtedly help former staff members and students to recall pleasant memories. For more than a century, the SA Military College, which would later become the SA Army College, has schooled leaders in the art of warfare. What a privilege it has been for the many students who attended courses there; what an asset the College has been for our Country, which these students have served with great honour in varying circumstances! The large number of staff members who served at the College over the years can look back with pride at the top quality leaders who passed through their hands and who later served with distinction in many combat operations.

The true extent to which the SA Army College and its predecessor contributed to the development of leadership potential would only really be appreciated when the many operations conducted by the SA Defence Force were evaluated; but this is not the aim of the author’s work. It is, therefore rather more apt to comment on the enormity of the adaptations in training that were required from time to time to adhere to the motto ‘Paratus’.

South Africa’s military culture originated way before the establishment of the then SA Military School; it was a natural process stimulated by the need for the protection of hearth and home which led to a natural aptitude for the art of warfare and tactics. This is why the forces of the two Boer Republics were able to astonish the world with their achievements against a massively superior force in the three-year Anglo-Boer war with Great Britain. Tactical adaptations such as mobile guerrilla warfare were executed with success – and all without formal training!

The establishment of the SA Military College enabled the further development of this capability but also saw the start of a new era of military warfare based largely on the European combat experience. The SA Military College was able to source from the tactical doctrines of its Allies and many of the College students later fought with honour side by side with some of the larger allies. However, this phase covering the two World Wars, left little scope for the SA Army College to develop a distinctive South African warfare approach and mindset. Circumstances dictated that tactical and doctrinal approaches were taken from those of the Allies. This situation changed in the period that followed after the Second World War. “Cold war attitudes”, insurgency wars and distinctive limited conventional threats made new demands on our own distinctive doctrines, training and armament. Furthermore, an arms boycott and political isolation had a positive consequence as it became necessary for military thinkers to show more initiative and to be more innovative and flexible. The SA Army College, together with other thinkers in this field, played a major part in designing and developing South African tactical and combat adaptations and training senior students in the application thereof. Student after student and course after course were prepared in this manner to satisfy the specific requirements of the threat to South Africa – true to the College motto ‘Paratus’.

This ‘Paratus’ foundation of military excellence can proudly be cherished by every student and staff member. May it also remain a valued asset for the new young nation now in its formative years."


- General C.L. Viljoen (Previous Commanding Officer of the SA Army College who retired as Chief of the SA Defence Force in 1985)

"Many a soldier passed through the College in their lives. For all Army Officer's the road leads to the College. The building known as the Paratus building is the most historical Military building in Thaba Tshwane.

It is estimated that well over 1900 Army officers took part in the 78 SA Army Staff Training Courses."
- Paul J. Els