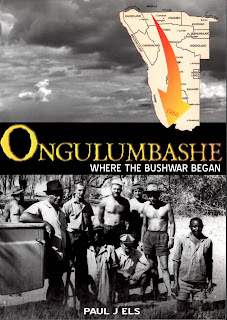 Security police obtained information that external trained freedom fighters established the first training camp in Ovamboland in May 1966. Recruiting was done from the local population. Other insurgents infiltrated through the Okavango in small groups and single members advanced as far as Tsumkwe in Boesmansland. Others again infiltrated gradually on to farms of the local farmers.

'Catch them' was the order from Prime Minister Verwoerd. This was the first time that a combined attack force of police and troops, with the support of the South African Air Force acted against intruders. Their attack on the Ongulumbashe base on August 26th, 1966 was probably responsible for the start of the 23 years border war.

This is an action packed eye witness report and a look behind the scenes of Operation Blouwildebees. It was an operation with many firsts, which will be particularly enjoyed by history lovers. It also gives an insight on the way of life of the Ovambo's, the vast countryside and the political situation of the time.

The author is a retired Warrant-Officer (Class 1) of the former South African Defence Force.

This eyewitness account is a must for the serious collector and researcher of the revolutionary wars in Southern Africa. This book describes the first clash that took place between elements of the South African police, army and air force on the one side and SWAPO's Plan soldiers on the other side.

The foreword was written by a former Commander of the Security Branch in SWA and a Commissioner of the SA Police, General J.V. ‘Johan’ van der Merwe while the epilogue is written by former Chief SADF General J.J. ‘Jannie’ Geldenhuys.

The Book contains 290 pages and is well illustrated with photographs; many are published for the first time! The book also describes how members of the Security Branch of the SA Police infiltrated the area as employees of PASCO ostensibly a private company. (The name PASCO is derived from South African Police = SAP = PAS + Company = PASCO).

A special agent is recruited and the Security Branch spy and infiltrate the terrorists. All this action leads to the arrest and conviction of several terrorists. This humble operation ‘Blouwildebeest’ leads to a bitter and sophisticated war in South Western Africa including Angola.

A worthwhile read and a nice addition to the bookshelf."
- Reach Publishers, Wandsbeck, KwaZulu-Natal